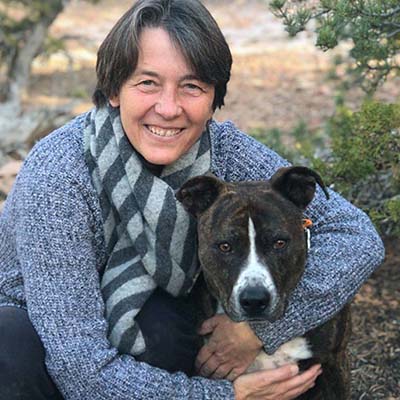 As a small kid, Suzy did not know what to do with her awareness of animals. She started walking imaginary dogs to ‘make sense’ of the information she received all the time. All the possible jobs that were available at the time involving working with animals never seemed like they matched the energy of what Suzy knew was possible. It started first to click when she became a dog walker in California. She even had an appearance on Cesar Milan’s Show “The Dog Whisperer.”
When Access Consciousness came into her life, the energy she perceived as a child was finally matching her awareness.

Now, leading animal communication classes in far-reaching places from a Japanese zoo to the South African wilderness and beyond, Suzy does not discriminate. Everyone and everything has something valuable to say if you are quiet enough to listen and hear.

She heads up the global classes called Talk To The Animals, continuing and expanding upon the classic book by Gary Douglas,

which has helped thousands have more clarity and ease with the animals they live with and love.

She is the creator of the bodywork modality, which is now being taught around the world called ESSE (Energetic Synthesis of Structural Embodiment). She worked with Gary Douglas and Dr. Dain Heer for years doing this unexplained bodywork until one day she asked Gary, “What is this called? What I’m doing when I work on you?” And that’s when Energetic Synthesis of Structural Embodiment came to be named. It’s a highly energetic process that people of all ages have come to enjoy and use with people, animals, and their own bodies.

Suzy is also the mastermind behind the global reach of Access Consciousness Live-streaming and virtual classes (online classes) since 2004. Since those early days of audio recording, Access Consciousness has grown beyond what anyone could have dreamed of under the careful considerations of Suzy. She continually outwits the technical limitations that are said to be impossible to overcome. Now Access live-streams classes from and to areas of the world that would never have access to these life-changing tools without her. Fourteen plus languages in some live classes and over 83 classes per year televised and broadcast with those numbers growing each year, the virtual side of Access Consciousness is expanding all the time.

Something that most anyone who has met Suzy will tell you is that she is a wealth of awareness, and wealth of authenticity, and a wealth of empowerment. From her work with animal communication, with bodies, to the technical side of Access Consciousness, in her no-nonsense way, she brings people to know that so much more is possible. There is something in her nature that makes you want to open up and to know it’s safe when you do. She brings this to every interaction and every class she facilitates.

Suzy’s Target?
“Really, when you ask me what my target is, the first thing that comes up is ‘To Change The Whole World.’ There are so many things that are not working here, especially when it comes to living and working with animals. This Earth is an incredible and beautiful place, and I will do whatever I can to create it as a sustainable, living organism. How can we create joy and possibility for all of us? Animals included?”

What choice could you make today that would be the change that this world is asking for?

Even if you have never considered that the world could change from your very willingness to explore it, it can.

She invites you to know that change is far easier and more available than it seems. Today might just be the day for the world to change with your help.